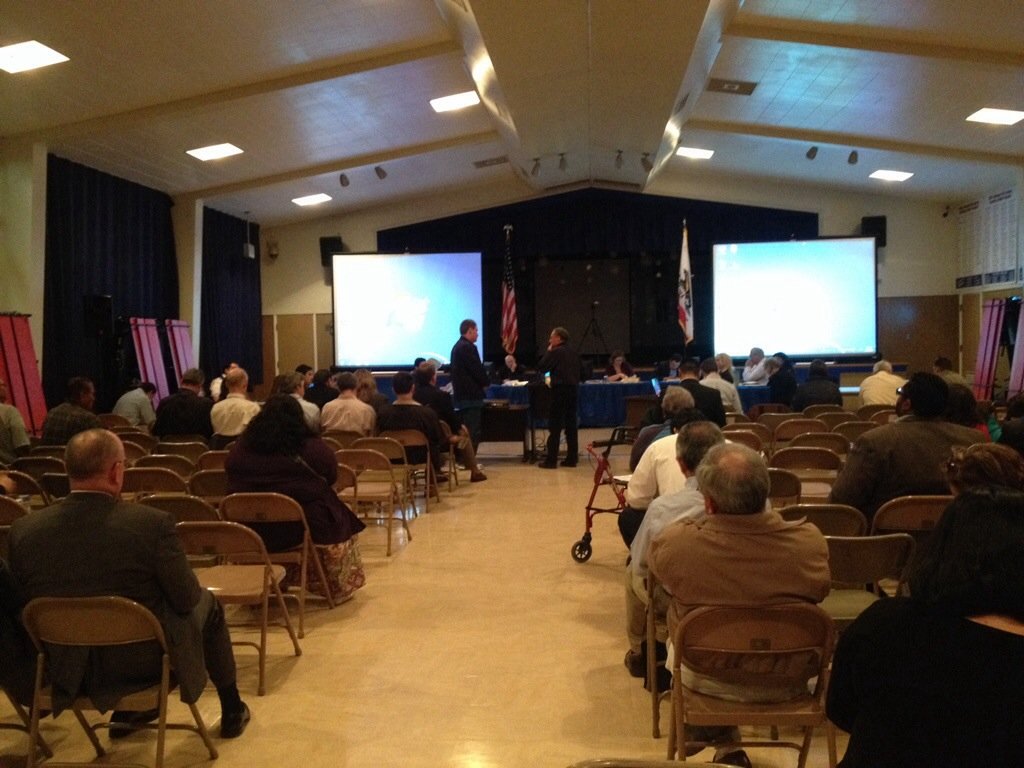 Last night the Regional Water Board voted to approve the staff recommendation to the permit expansion for Section B-18 of the Kettleman Hills Facility. The public hearing held at the Kettleman Hills Elementary School, began at 5:00pm with an overview provided by staff on their evaluation of the permit expansion in regards to water quality. Greenaction and El Pueblo for Clean Air & Water of Kettleman City were stakeholders to the hearing and were able to raise some important questions to the Water Board staff and Chemical Waste Management staff. A crucial moment happened when Bradley Angel, Director of Greenaction, through questions made Chem Waste staff admit that the facility was only accepting “a few percentage points” of it’s total capacity while the state was conducting the Environmental Impact Report. Bradley continued to contrast that to the full capacity numbers that were never studied by EPA. In his testimony, Bradley, reiterated that the Water Board was basing this decision on a flawed EIR report that was pushed through with faulty data and police scare tactics.

This was another step in the process of this expansion that has been increasingly controversial. CCEJN coordinator, Cesar Campos, was present at the hearing and delivered the following comments on behalf of CCEJN:

Central California Environmental Justice Network is opposed to this permit expansion because we feel that there is extensive evidence that this facility contributes greatly to adverse health hazards for residents. I’ve heard many of you mention tonight that police presence is typical of any “controversial permit decision.” Now, I ask, why is this a controversial permit decision? Is it because we don’t know how to behave? Because the residents of Kettleman City don’t know how to behave? Or is it because the data is questionable? Or perhaps because of the extensive history of violations of this facility? Nonetheless if we are going to treat this permit as a special and controversial decision then I think it is fair to place special restrictions or ask more for the expansion of this facility.

For example, groundwater and saturated zone monitoring should remain at a quarterly basis, [the water board was moving to make monitoring bi-annually], or perhaps the water board should take an approach of complying with the residents & monitor when they wish to have monitoring. I think even those in support would take the safe side on this one. Furthermore, the discussion of facility inspections on Section 6A of the Monitoring & Reporting Programs document should be expanded to include monthly inspections & reporting actions by water board staff & require an unannounced inspection component.

Last week in West Virginia, Freedom Industries released an unknown amount of the chemical MCHM into the Elk River, and endangered close to 300,000 people. Some respectable news outlets including climateprogress, National Geographic, and NPR claim that the response to the spill both by the company & EPA was inadequate. The thing about water is that it only takes one time, one violation, one leak for substantial harm to happen, this is why my organization rejects the idea that violations do not represent a threat to water quality & this is why we feel that it is appropriate for the Water Board to place standards for emergency response and begin to place thresholds for harmful chemicals that address limits for public health during the permitting process so that when a violation or emergency situation arises agencies don’t have to struggle to place arbitrary guidelines.

The Regional Water Board has been often progressive & very reasonable of environmental justice & I think this is a possibility to once again set an example by rejecting this permit or at the very least employing an extensive regulatory approach.

CCEJN will continue to update on the process of this hazardous facility expansion in Kettleman City.