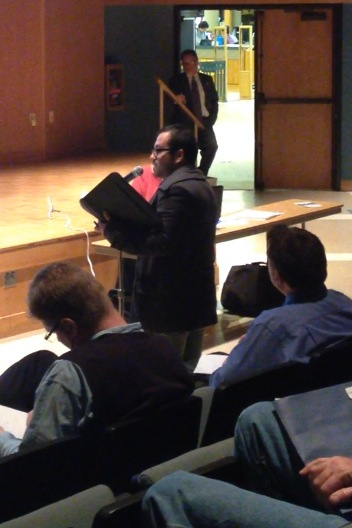 On Thursday, December 12, 2013 the Division of Oil, Gas, and Geothermal Resources, a division of the Department of Conservation held a scoping meeting in regards to the preparation of  a well-stimulation treatment EIR mandated by Senate Bill 4 (Pavley).  Several activists joined the hearing to speak out against fracking and to help shape the scope of an Environmental Impact Report in order to make it as comprehensive as possible.

CCEJN affiliated activists, Tom Frantz of Association of Irritated Residents, Ana Martinez of Greenaction for Health and the Environment, and Cesar Campos, CCEJN Coordinator spoke about the dangers of fracking and the dangers of ignoring data via an Environmental Impact Report.

First and Foremost I want to make it very clear that we are fundamentally opposed to fracking & acidization and wish that the Department of Conservation order a moratorium.  We are opposed to well stimulation treatments on the grounds of cumulative health impacts to the people of the San Joaquin Valley, and on the grounds of resource preservation like preserving water & air quality.

That being said, we wish that the EIR employ a comprehensive and good-faith process to gaining effective data, as CEQA requires.  Part of this good-faith effort is actively involving community in the preparation of the data of all of the issue areas via groun-truthing and further discussions.  I’ll go ahead and mention some areas of special interest to us.

On Air Quality–the EIR should not ignore the active flaring that is already happening throughout Kern County and releases VOC’s and NoX into our atmostphere.

On Hydrology & Water Quality–the EIR should not ignore the issue of water preservation & water restoration that are becoming increasingly harder to be true in the valley.

On Hazards & Hazardous Materials–a thinkprogress report published on December 8th warns about the amount of tons of solid waste that are produced by acid stimulation treatments & specifically mentions landfills in West Virginia that are accepting, in cases, triple the capacity allowed of fracking hazardous waste.  The California Department of Toxic Substances Control announced earlier this year a goal of reducing hazardous waste in the state by 50%.  This EIR should take into account how, waste generated by fracking will affect that goal.

On Mitigation Measures– part of the EIR is to provide these mitigation measures for well stimulation, and I want to show a strong voice for making these mitigation measures directly address cumulative health impact.  This means funding health studies, clinics, and hospitals so that the residents of Kern County have better health care access.  Something that of course has traditionally been ignored in this region, and something that has traditionally been ignored by industry and state agencies.

Finally, I want to make a comment regarding jobs that inevitably end up being a huge issue and talking point in these type of meetings.  Currently there are 18,000 Gas & Oil jobs in California, compared to 32,000 solar energy jobs.  Solar energy currently represents only 2% of the California energy consumption.  Increasing that number to 20% represents far more jobs than Oil & Gas can provide.  Fracking is not the answer to unemployment in the valley–and perhaps you can put that line somewhere in the EIR.

The Draft Environmental Impact Report is scheduled for publication sometime in September 2014.  CCEJN will continue to update on the steps to the process set forth by Senate Bill 4.  The next hearing in Bakersfield is scheduled on January 8th, to gather public comment on the proposed regulations that SB 4 will place on industry.