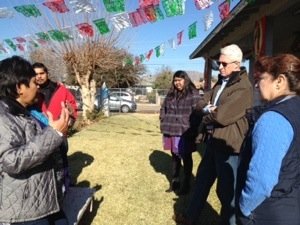 On December 10th, 2013, Brian Leahy, Director of the California Department of Pesticide Regulation Visited Tulare County. El Quinto Sol De America, based out of Lindsay, CA hosted a series of site visits to towns like Tooley Ville and Plainview where residents were able to meet with Mr. Leahy. The residents spoke to the Director about their own experiences with pesticide drift and overall misuse in a county that represents a large part of the pesticide use in the State of California.

Activists from Californians for Pesticide Reform, Community Water Center, California Rural Legal Assistance Foundation, and Central California Environmental Justice Network, also joined the discussion bringing attention to areas of much needed enhancement. Some of these areas are the continuous use of Chlorpyrifos in the state, the harmful effects of pesticides that filter into our water reservoirs and contaminate our sources of drinking water, lack of safe and effective reporting avenues for pesticide mishandling and projects to enhance the enforcement capability of the department. Director Leahy was receptive to all of the comments made by advocates and residents, and told the group that he is working to promote stronger communication between the Department, Ag Commissioners, and the residents.

Among the notable members of the group were Irma Medellin and Teresa De Anda. Irma Medellin, Director of El Quinto Sol de America, spoke about the frustration of working to acquire stronger regulations for pesticides and seeing how they continue to be used fluently in Tulare County. Teresa De Anda recalled the horrors of two pesticide incidents, one in Earlimart and one in Weedpatch, that motivated her to work endlessly to acquire legislation that would protect communities from pesticides.

CCEJN is working with all of these advocates and the Department to promote strong regulations and effective enforcement that will protect the people of the San Joaquin Valley from the adverse health effects of pesticides.