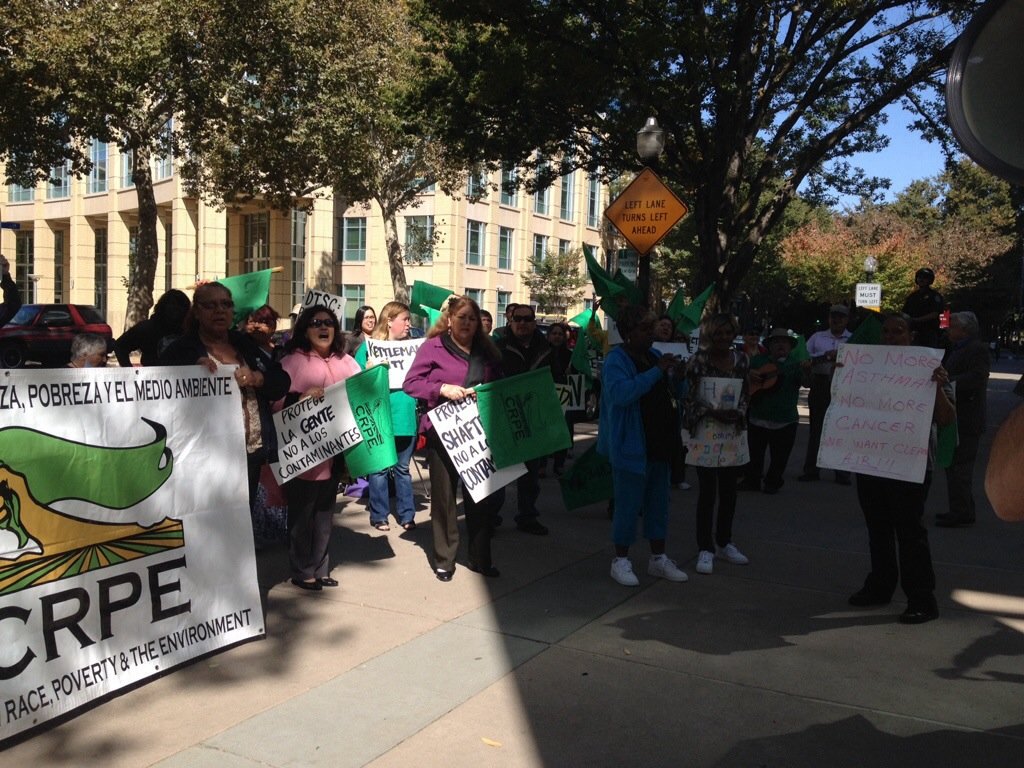 100 community members and environmental justice activists from across the state united and protested in front of the Department of Toxic Substances Control/Cal EPA yesterday to demand DTSC protect people and not polluters.

Chanting “We are all Kettleman City/Todos Somos Kettleman City” and “Justicia Ahora/Justice Now,” community members spoke out in front of a bed decorated with pictures of Governor Brown, DTSC Director Raphael, a caricature of a toxic polluter holding bags of money, and logos of giant polluters that get friendly treatment by DTSC. – and demanded that our government officials get out of bed with polluters.

We also successfully demanded that top officials of Cal EPA and DTSC come outside onto the plaza and meet openly with the protest participants, and community members then blasted the state officials, demanded action to protect communities, and held the officials accountable. In a startling admission, DTSC Deputy Director Brian Johnson admitted that Kings County’s use of racially discriminatory hearing procedures during the Kettleman City toxic dump EIR hearings was “unacceptable,” yet DTSC is relying on that racist document to justify trying to expand the Chem Waste toxic dump.

State officials were presented with a list of demands including calls for stronger enforcement against violations, denial of permits to chronic polluters, prompt and safe cleanup of toxic sites, denial of permits to Chem Waste, and shutting down the Exide plant in East LA.
We also submitted a letter signed by 52 groups demanding DTSC deny permits to expand the Chem Waste toxic dump in Kettleman City.

People are fired up after the inspiring protest, and together we must keep up the fight until we achieve environmental justice for all!

AND BREAKING NEWS AND A SMALL BUT IMPORTANT VICTORY!
FOLLOWING THE PROTEST, DTSC HAS GRANTED THE REQUEST FROM CRPE AND GREENACTION TO EXTEND THE PUBLIC COMMENT PERIOD ON THE PROPOSED EXPANSION OF THE CHEMICAL WASTE MANAGEMENT KETTLEMAN HILLS HAZARDOUS WASTE FACILITY UNTIL OCTOBER 25TH…PLEASE SEND COMMENTS DEMANDING A DENIAL OF THE PERMIT TO DTSC AT THIS EMAIL ADDRESS: WLorentz@dtsc.ca.gov