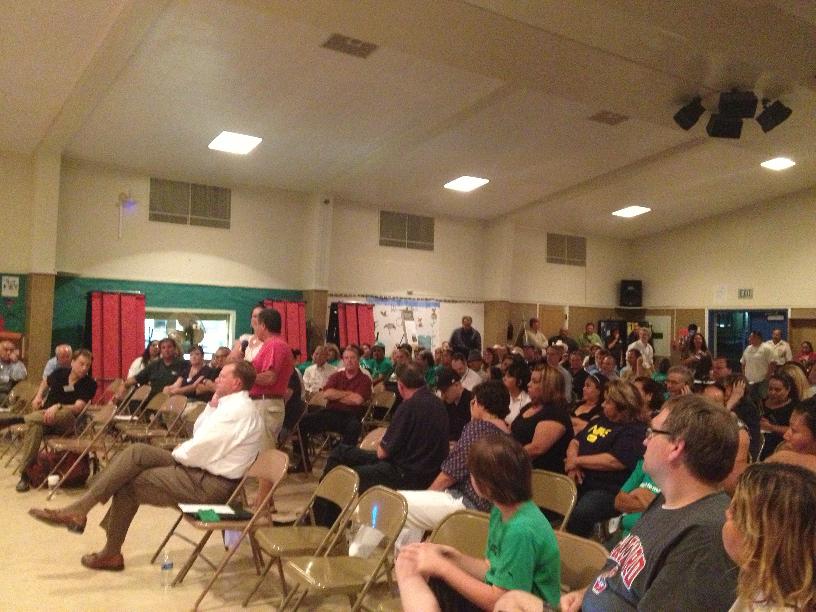 During the meeting, members of CRPE, El Pueblo, Greenaction, CCEJN, and allied groups spoke about the cumulative health impacts that have been observed, but never studied in Kettleman City; they also spoke of the repeated violations that the facility has committed.  The efforts of our organizations were met with opposition from Kettleman Hills supporters.   Those who favored the proposed expansion, geared up in green shirts, spoke of the jobs that would be available and spoke of services that the facility has provided for the community as well as their feelings that this facility has been responsible in the past.

CCEJN rejects those points because we know that at its peak, only a tiny fraction of the jobs created by KHF were filled with residents of Kettleman City.  Most jobs were filled by high skilled laborers from other parts of the state.  All efforts of Kettleman Hills to bring services to the community have been minimal.  It takes one a few minutes to realize that Kettleman City is not thriving.  Residents are faced with poor water quality, no real health care access, lack of infrastructure like streetlights, adequately paved roads, lack of sidewalks, etc.  Furthermore, the majority of residents in Kettleman City still live in low socio-economic status, and have no clear avenues for education due to the lack of schools.  Finally, statements about the responsibility of Kettleman Hills are misguided as one can see from their long list (over 300) of violations.

CRPE members, who collected signatures in opposition, assure us that there is a whole demographic of Kettleman Hills residents that have deep concerns with the expansion, but were not present at the meetings.  It seems like those members of the community that have been there for a long time feel inadequate political efficiency and are reluctant to speak out against what they perceive to be a giant; Chem Waste.  CRPE Assistant Director, Lupe Martinez, explains how the situation in Kettleman City may be worse than what was originally perceived, as he points out that as they walked through Kettleman City they found 7 cases of cancer in just one street!  Efforts to mobilize residents to speak up are necessary in Kettleman City.  Furthermore, the need for a detailed, scientific, medical study to the cause of such high levels of illness in Kettleman City is obvious.

CCEJN Coordinator, Cesar Campos, spoke to this point as he addressed members of the Department of Toxic Substances Control.  The official statement given to DTSC from CCEJN read:

CCEJN is opposed to this proposed expansion for various reasons:

Second, we feel that all proposed mitigation measures for this project are inefficient because they fail to address the real problem, which is that the people of Kettleman City have been traditionally and disproportionately affected by negative health hazards.  And no scientific study, let me clarify, a scientific study interested in true research variables and done in good faith has ever investigated cumulative health impacts in Kettleman City.  CCEJN rejects the “health risk assessment” put forth by DTSC as mediocre and unrealistic.  Ultimately, we feel that any mitigation measures should have at their forefront enhanced health care access and true medical research data.

Finally, we feel that permitting this expansion would be a clear act of geographic discrimination and environmental racism.

In the coming weeks CCEJN will prepare a more technical comment to DTSC in regards to this proposed expansion.  CCEJN is also interested in working with CRPE, El Pueblo, and Greenaction to bring a louder voice to those residents of Kettleman City that are currently unreceptive to publicly speaking against Chem Waste.