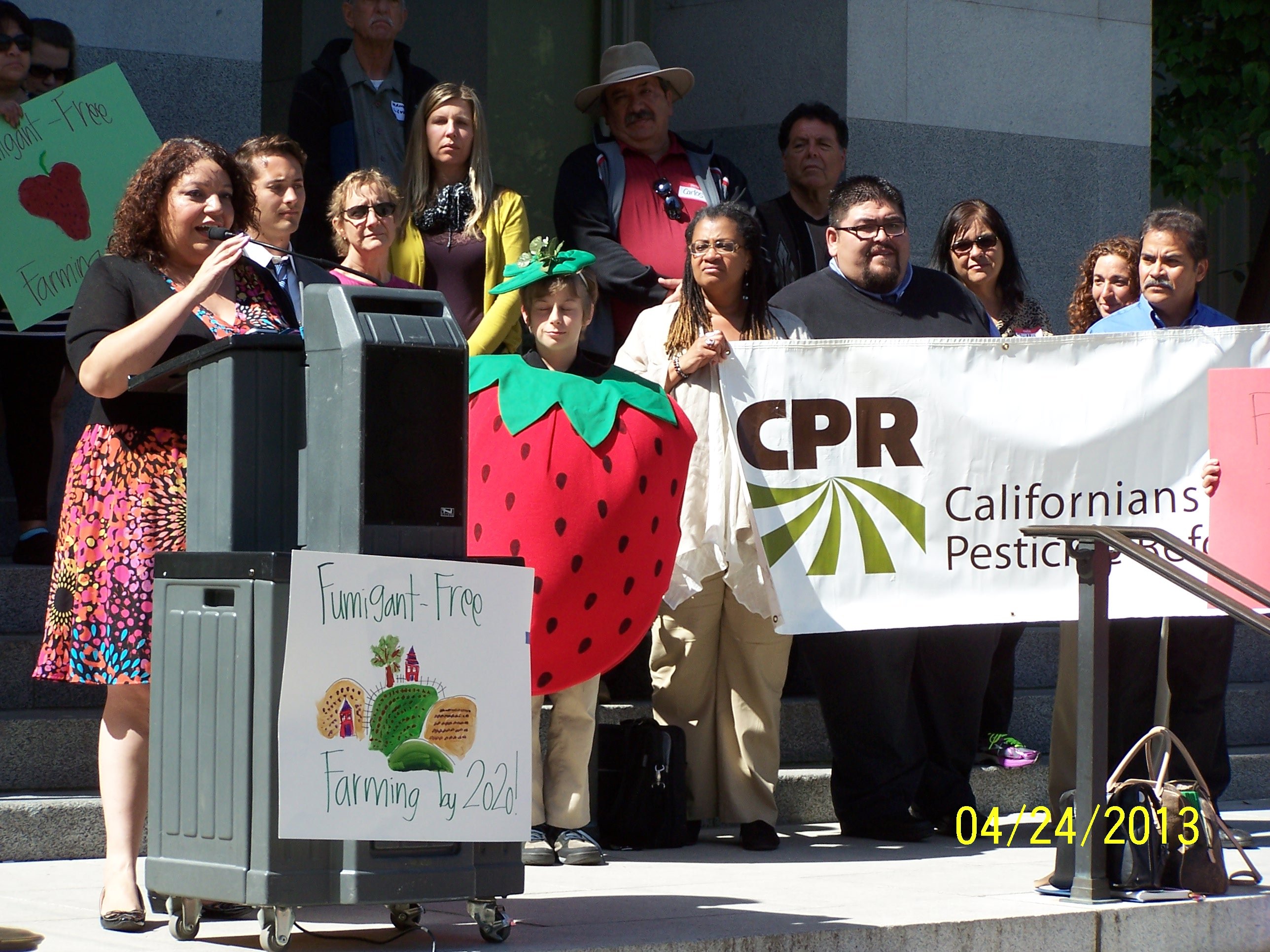 Members of CCEJN joined the lobbying effort of Californians for Pesticide Reform to pressure legislators to seek a fumigant-free California by the year 2020.

Fumigants are a type of pesticide that is commonly used in California on soils bearing strawberries, raspberries, tomatoes, carrots, and other crops.  The way to treat these soils is by injecting the fumigants in gas form directly into the soil prior to planting crops.  This practice is inherently dangerous as the gas form of the fumigants often drifts into nearby areas.  In fact, fumigants are the most dangerous type of pesticides in the market.  On this day the coalition focused on bringing attention to two specific fumigants: Chloropicrin and Methyl Bromide.

Chloropicrin and Methyl Bromide are unstable and dangerous fumigants that have sparked citizen concern for decades.  Chloropicrin is a colorless highly toxic liquid–at some point a stronger compound of which–was used in chemical warfare!  Although the efforts of citizens to limit and eliminate the use of these fumigants have been extensive, unfortunately they are still widely used in the San Joaquin Valley and on the Central Coast.

Despite the claims by the agricultural industry that there are no feasible alternatives to the use of fumigants–safe replacements for fumigants already exist.  Using non-chemical technologies as an alternative to fumigants is a better option.  Organic farms and sustainable agricultural practitioners are already using economically viable alternatives like: use of resistant cultivars, cultural crop rotation, cover crops, natural fertilizer, soil solarization and anaerobic disinfestation.  These practices and alternatives have been documented to work in smaller agricultural plots, but have not been expanded to larger agricultural fields.  As part of the lobbying efforts our group engaged with legislators about funding expansion projects that will rid California of fumigants by the year 2020.

The resistance of state legislators and the Department of Pesticide Reform to enforce stricter regulations on these chemicals, and to push for cleaner alternatives point to the overwhelming pressure of the giant agricultural industry.  However, as we look forward to making California a better place to live for all people, it is simple to understand the importance of protecting our residents from fumigants.  It is imperative that the legislature reassesses the often undisputed support for everything agriculture and solicits that agriculture take care of our land and our people.  During the legislative visits with Assembly men and Senate staff, the group made the case that support for agriculture and pesticide reform are not opposites, but are partners in creating a safer, healthier, and self-sustainable California.