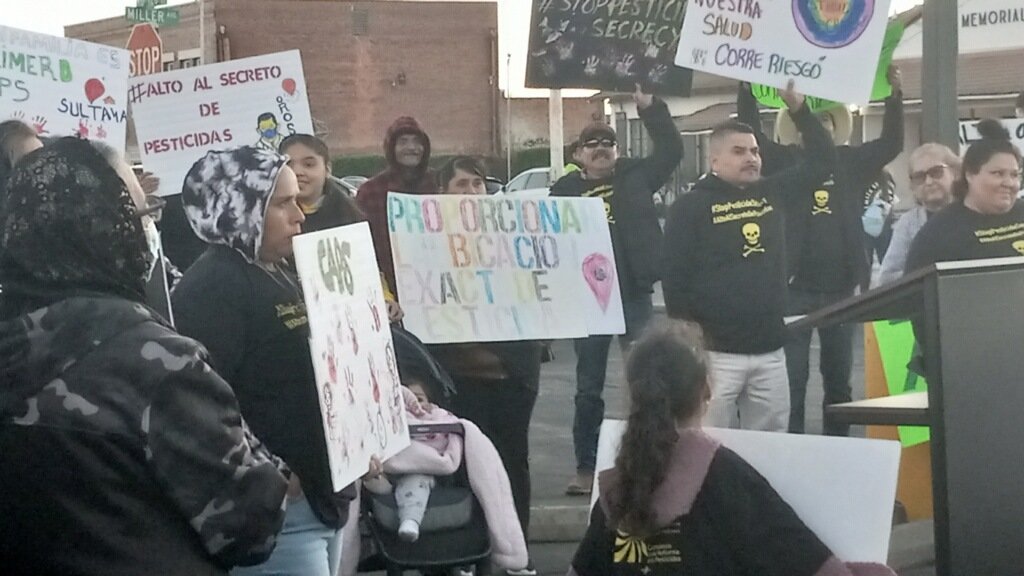 On November 10th, in a small northern Tulare County town known as Orosi, over a hundred residents from various counties across the San Joaquin Valley gathered to raised their voices and demanded to the Department of Pesticide Regulation (DPR) the right to know full transparency of when pesticides are applied or used. The residents list of concerns towards the DPR’s notice of pesticide usage included;

For over two hours, community members eloquently shared about their stories of being drifted while enjoying a barbecue in their backyards, to knowing someone who lived near the fields for decades that developed cancer or that suffer from autism, asthma, and other health effects associated to pesticide exposure, to even sharing that their own pets have died from eating pesticide contaminated food.

The community group consisted of residents of rural areas who all in one way or another have been negatively affected by pesticide usage. Some members have lived next to the fields where pesticides are applied, some were advocates who have fought for decades to free communities of pesticides and some were small town farmers. One Filipino farmer of Orosi, said

“Knowing what pesticides are applied is not enough, we need more, we need to stop applying these chemicals that are killing us, making us sick and making big growers richer.”

Overall, the sentiment shared was the same, we need to know, and we need to know now, not until 2024, when the Department of Pesticide Regulation is scheduled to finalize the statewide pesticide notification system.

As we have informed in an article published in the Community Alliance in January 2022, the development of a statewide pesticide notification pilot began in 2021, when Governor Newsom allocated 10 million dollars in the 2021-2022 state budget and commissioned the DPR the development of a statewide system that provides information to the public about pesticides used around them. Since August 2021, the new DPR director, Julie Henderson and her team have organized meetings with County Agricultural Commissioners (CACs), visited counties with large agriculture presence (including Fresno) and huddled with some EJ groups.

DPR hired professionals from the “California State University Sacramento Consensus and Collaboration Program” to lead a series of focus groups and webinars to listen to multiple stakeholders including residents, other regulatory agencies, community organizations, regulated industries (farmers, professional applicators, registrants, commodity associations) and AG commissioners among others. DPR published in their website the summary of the findings of this first series of virtual focus groups, which evidenced differences of opinions in who should receive the notifications; when they should receive them; and how notifications should be made. The format and facilitation of these focus groups/webinars was strongly criticized by community advocates because the participation of residents was limited to less than one-minute, while other stakeholders were given more time to express their opinions.

The result of this criticism was that DPR changed the facilitation team and recruited researchers, Clare Cannon and Bernadette Austin from UC Davis, who seem to have more experience doing participatory projects. It’s fair to say that the second round of virtual workshops that DPR carried out in June 2022 with the assistance of the UC Davis team, was better organized. Time given to participants was more equitably distributed and written comments in English and Spanish were also accepted.

Nevertheless, the subsequent decision of organizing just TWO in person workshops (one in Orosi and one in Ventura) for the entire state and ONE virtual workshop in the Fall of 2022, did not seem appropriate. Transportation barriers, obligations picking up children after school or not being able to leave work early made it difficult to attend one of the in person workshops scheduled in the middle of the week.

It was not easy for residents, who are eager to receive a notification system, to drive to Orosi or Ventura to join the in-person workshops.

Another aspect that was disappointing was the design of these in person workshops. DPR had planned a “world style café” format, having three stations in which participants would go around and learn about DPR’s work, receive an update on the notification pilots that were implemented in 4 counties, and only have one station dedicated to listening to residents and advocates.

However, community member participants in the Orosi workshop decided otherwise and took center-stage to changed the format of the meeting. They did not rotate in the different stations, they remained in one section of the hall and waited in line to express their opinions. While AG Commissioners from Tulare, Fresno and Sutter counties were in attendance, as well as two representatives of major AG industry groups, Manuel Cunha, President of the Nisei Farmers League, and Roger Ison, President of the California Association of Growers, none of them attempted to make public remarks. They quietly observed, I dare to say in disbelief, that the community have taken over the meeting, disrupting the plans that DPR and their paid facilitators, had envisioned.

It was a powerful moment, especially when residents walked into the room chanting and then waited patiently for their turn to speak.

But their patience is running out, they want DPR to act faster. If growers in Kern County receive information from neighboring growers before they apply pesticides, if four counties (Ventura, Riverside, Stanislaus and Santa Cruz) were able to implement a notification pilot this year, why do the rest of the residents in the San Joaquin Valley and the state need to wait until 2024 to exercise our “right to know” which pesticides will be applied near our homes?

The health and wellbeing of those who live, work and study near the fields where crops are grown and pesticides are applied are also important and deserve to be protected, not only the crops of the growers that insist that pesticide use is necessary to maintain our title of being “the food basket of the world”. California can do better, not only by notifying us before pesticides are applied, but by reducing the use of pesticides.