‘Thorn in oil’s side’ speaks at Delano 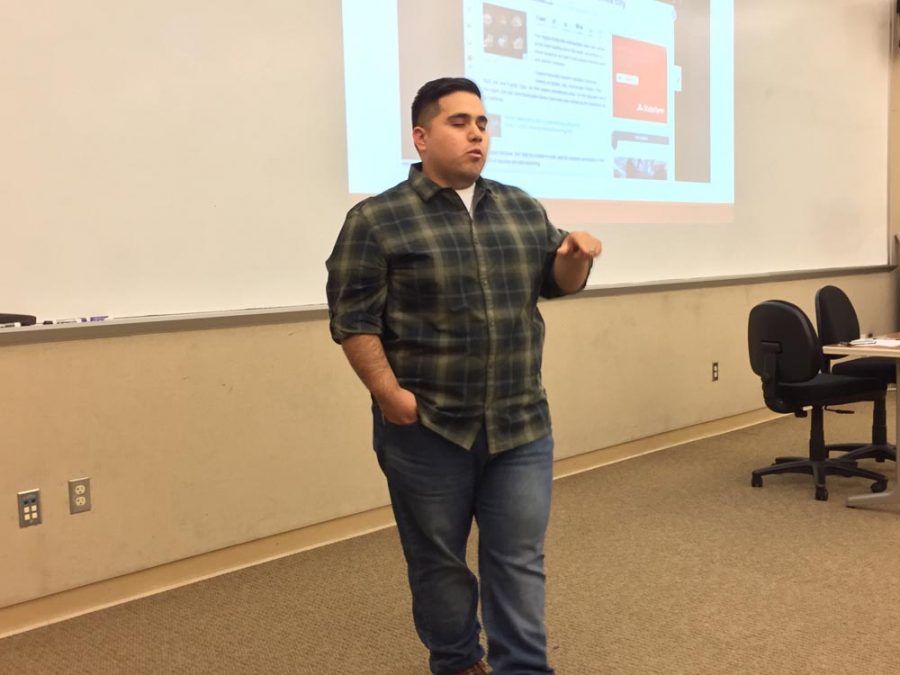 Two experts in their fields of social and environmental justice spoke on the poor health conditions in the rural areas of the Central Valley on Nov. 21 as part of Bakersfield College Delano Campus’ C.H.A.P. (Cultural and Historical Awareness Program) fall series.

“Both of my parents were migrant farm workers who would pick strawberries in Oxnard in the winter and in the summer go to Blythe, California near the Arizona border to pick lemons,” said Gustavo Aguirre Jr., project coordinator at Central California Environmental Justice Network.

Both of Aguirre’s parents illegally migrated to the U.S. when they were young, but soon after became registered, and eventually, citizens. His father soon came to work with the United Farm Workers of America working to improve working conditions, climbing to national vice president before his retirement.

Aguirre’s organization works in Kern County and Northern California to urge the agricultural industry to safer practices and report violations that would otherwise go unchecked.

“We receive a wide spectrum of reports in communities that deal from graffiti, illegal dumping, to big industry violations,” he said. “We deal with hydraulic fracking, we deal with pesticide issues: we deal with so much.”

Aguirre’s team will also sit down with the EPA to discuss Central Valley conditions.

“We have a one-on-one conversation of issues that are affecting rural communities and then they address them, either fixing them or recommending sources that have those capabilities,” he said.

When asked what it’s like to be the thorn in the side of the big industries of oil and agriculture, Aguirre reacted with excitement. “It’s a tough job, but it’s hella fun. I would say five or 10 of my good personal friends work for the oil industry as engineers, in the rigs, and welders.”

Demonstrating one of his organization’s air sampling buckets (part of their “Bucket Brigade” program) for the audience, Aguirre recounted a victory of environmental justice.

“They were bringing about 18 to 30 trucks of biomass and green waste every day from Los Angeles to Arvin, and the emissions they were producing were very significant, a lot of H2S (hydrogen sulfide).”

The company was later shut down and replaced by a more environmentally conscious provider. Aguirre also recounted a story of pushback from a company they were investigating.

“We were filming these tanks and two pickup trucks drive up to us on either side,” he said. The two men began insisting that Aguirre and his team not film there, suggesting it’d be dangerous for them.

“’People die here,’ and we’re like, ‘what do you mean people die here? Are you insinuating we’re going to die today?’”

The men eventually gave up trying to send away Aguirre’s team, and soon after Aguirre filed a report that found them in violation of several air emission codes.

Standing beside Aguirre was Rodrigo Alatriste-Diaz, a doctoral student in developmental sociology at Cornell University.

Alatriste-Diaz’s research focuses on the social and ecological determinants of health in the Central Valley, which includes education, race, income, whether or not someone votes, as well as ecological factors like neighborhood, infrastructure and housing condition.

“What’s interesting about this study is that most people say ‘such and such never goes to the doctor and that’s why he’s really unhealthy.’ Well it turns out medical care, access to it, and whether it’s used makes up only 30 to 38 percent of what makes a person healthy,” he said.

Alatriste-Diaz pointed to data showing Kern County’s 38 percent obesity rate versus only 24 percent statewide, and posed the question to the audience of why that might be.

“Where you live has a bigger effect than some of the other stuff we normally think about with health.”

His research suggests that environmental factors contribute to overall health much more than access to hospitals, and that a disparity in those conditions in rural communities in the Central Valley is the biggest contributor to the area’s statistics.

The panel was then opened up to the audience for questions, of which the first was one of advice for those wanting to organize events and raise awareness of issues locally.

“I’ve only been doing this work for two years, and it’s a tough job to get people engaged. It’s a process, you have to educate, empower and really encourage folks to go out there and make a difference,” Aguirre said.

“A predecessor of mine used to preach about changing the narrative. It’s telling people the truth. Sometimes the truth is nasty and not what people want to hear. It’s very hard to listen to the truth, but when you empower people and you encourage them to do something for the better, it takes time and it’s a slow process, but once you get one or two folks in, they get one or two folks in,” he said.