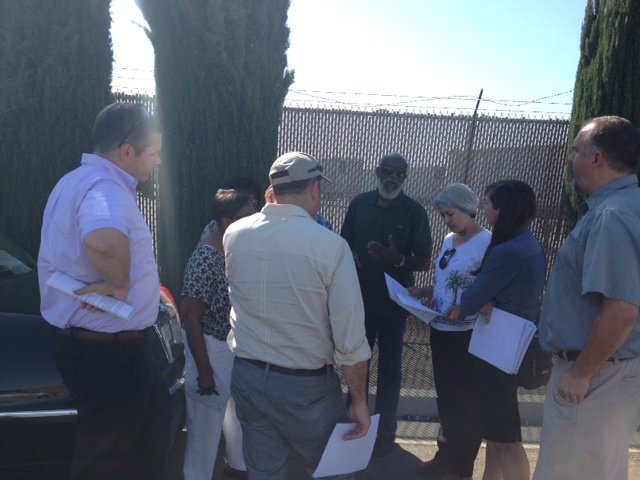 On Wednesday, July 16, U.S. EPA Director of Environmental Justice, Matthew Tejada, joined organizations in the valley as they showcased some of the many stories of injustice that exist here.  The tour coordinated by U.S. EPA Region 9 and CCEJN provided a full day of resident meetings and travel to specific locations with the hope of covering as many topics as possible.  Although the visit was very productive, we all made sure to tell EPA that “one day is not enough to cover all of the stories that are important in the valley, give us a week next time!”

The tour began in a refinery in Kern County outside of Lamont, where members of the Center on Race, Poverty, and the Environment (CRPE), Global Community Monitor (GCM), and Committee for a Better Arvin (CBA) met the EPA officials.  Through this part of the tour, the group focused on Kern County’s tradition of oil drilling, and flaring.  The group visited the location of the evacuated site in Arvin, where a gas pipeline leak made indoor air quality alarming in 8 homes several months ago.  The officials were able to enter one of the houses and commented on the smell of gas.  This incident has been unresolved, and residents have not been able to return to their homes yet. Several jurisdiction gaps about protecting resident’s health in relation to oil drilling and gas transport have been identified.  The group also stopped in front of the Community Recycling and Resource Recovery Center, that has been a traditional environmental justice battle in Arvin.  CBA members and GCM were able to talk their constant air quality monitoring work surrounding the facility.

From Arvin, the group traveled to Shafter to meet with the long-time air quality advocate Tom Frantz of Association of Irritated Residents (AIR).  Frantz met the group in front of an elementary school that has been affected by fracking.  Across the street from the school, Sequoia Elementary, an active fracking well has been sited.  Currently the state has no real regulations to protect residents from fracking, and also does not fully understand the effects of fracking on people’s health.  Hundreds of advocates across the state have asked for a moratorium and an outright ban on this extreme extraction practice.

After Shafter, EPA officials traveled to Fresno county, and their first stop was the community of Lanare.  Lanare is a small unincorporated farm-worker community with several infrastructure and development issues.  This community is home to a failed water treatment plant that was too expensive for the community to maintain.  While meeting at the Lanare Community Center, several residents were preparing for a food distribution date related to the drought.  Leadership Counsel for Justice and Accountability (LCJA), and the residents painted a real time picture of the hardships that this environmental justice community faces.  Our conversation ranged from infrastructure, to septic tanks, to the water drinking fund that recently was transferred to the State Water Board from DPH.

In the City of Fresno, we visited several census tracts identified by CalEnviroScreen 2.0 as some of the most over-burdened tracts in the state.  In Southwest Fresno, an LCJA attorney met the officials alongside several residents of Concerned Citizens of West Fresno (CCWF).  At this location the group discussed the historic polluting presence of the Darling Rendering Plant in their community.  EPA representatives were able to smell first-hand the stench that comes out of the rendering plant, and judging by their reactions, they were pretty impressed with its unpleasantness. Residents of CCWF also talked to the officials about historic land-use practices that have made their neighborhood the most dis-invested neighborhood in Fresno.

To finish off our day, we traveled across HWY 99 to the community of Calwa.  In Calwa, residents of Latinos United for Clean Air (LUCA), and Fresno Metro Ministry (FMM) brought us to an illegal dumping site on the corner of 9th & Grove.  This is an incredibly large illegal dumping site that definitely made an impression on the EPA representatives.  At this site we talked about open dumps, hazardous waste, land-use practices, and lack of enforcement by regulatory agencies.  At some point, the EPA representatives were so engaged, that they all walked off from the group to enter the site and began looking for and identifying traces of what could be RCRA waste.  Conversation about this dumping site will continue through the Fresno Environmental Reporting Network (FERN) taskforce meetings, that U.S. EPA is a part of.

Throughout the day, advocates focused on sending two main messages to Tejada, EJ Director.  The first was to find avenues for legitimizing the principles of community monitoring under EPA regulations and enforcement.  In all of the locations that we visited there is opportunity for community data gathering projects, and there is also high community concern and high resident engagement.  Capitalizing on that engagement could be crucial to enforcement actions.  The second message that is very much related to the first one is to find avenues and ways for U.S. EPA to fund those community monitoring projects.  Any regulatory agency knows that it takes a lot of agency resources to put a strong enforcement case together.  In many of our communities it takes even more time and resources by community residents to even get regulatory agencies to pay attention.  Finding ways of optimizing and legitimizing community monitoring can really change the game in terms of enforcement and regulation shaping.  CCEJN will continue these conversations in the months to come.