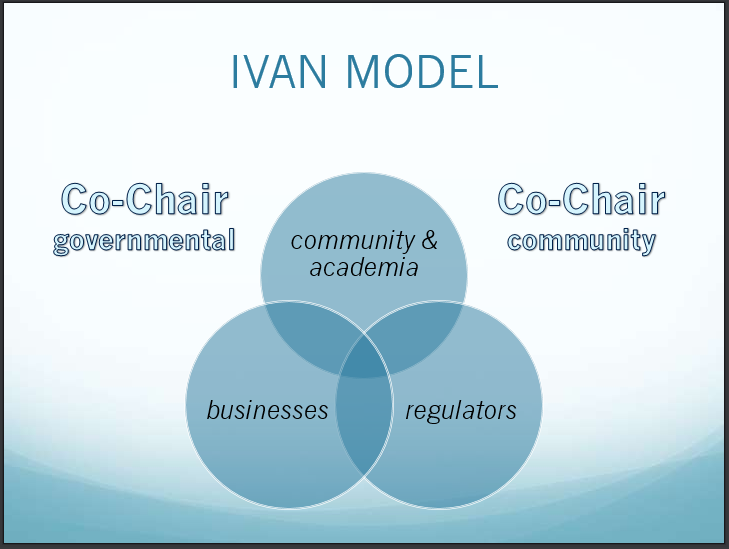 Last Wednesday (6/11), CCEJN Coordinator visited the enforcement division of the US EPA to provide a fresh perspective of enforcement from the viewpoint of community-led projects.  This workshop was part of a series of monthly trainings provided to US EPA staff.  This month, the topic was community-led enforcement and reporting networks like KEEN and FERN.  Ryan Atencio, of the California Air Resources Board (CARB) and Cesar Campos, CCEJN Coordinator, alternated in telling stories about their role as problem solvers for these networks.

Atencio began the talk with an overview of how the IVAN model was formed.  He spoke about his experience working in Imperial Valley and some of the problems that residents were facing as they reported any environmental problem.  At the time agencies were unable to respond timely to many complains which gave reporting the reputation of sending complaints into a “black hole.”  However, through the work that Atencio and Luis Olmedo, of El Comite Civico del Valle, they were able to formalize the first resident reporting network of IVAN in Imperial Valley.

The change that came with the network was automatically visible in Imperial, and the community was able to reap a lot of benefits from it.  This network succeeded in upbringing several cases for enforcement, generating violations and fines, as well as creating a set of “green actions” that were not necessarily part of enforcement, but taught inspectors to think a little differently and brought several improvements to communities.  One such case, that Atencio mentioned was that of a park in which residents were drinking water from a hose and through this network, residents, regulatory agencies, and non-profits were able to come together and mobilize to get a drinking fountain in the park.

Those actions may not carry a lot of weight in terms of enforcement, but they certainly carry a lot of weight for affected communities.  Working with environmental justice communities we have learned that sometimes actions that are overlooked by regulatory agencies are in fact increasingly important to residents.  Campos was able to recount a similar story through the FERN network in which a resident called in to report a neighbor that was constantly burning wood and trash in his home.  The reporter was an older man and had asthma.  When FERN triggered the Air District to respond, there was no enforcement action that took place but the inspector was able to hand some information out to the neighborhood.  This reduced the amount of burning in the street and the original resident that complained called FERN back thanking the network profusely because he was able to breathe again.  Just a story that shows how simple acts carry a long weight for communities.

Campos finished the conversation with general successes that have come from the networks in Kern and Fresno counties as well as some ideas and steps to move forward.  Two of the most notable topics were the inclusion of these type of networks as Supplemental Environmental Projects (SEPs) that could be funded through the enforcement actions and fines gathered through violations. This will ensure that the networks become self-reliant and independent.  Another idea that is notable is to engage these networks as methods for gathering community data.  Community led data gathering as part of a citizen science network can help regulatory agencies gather accurate information.  Campos made a case to incorporate these networks and data gathering systems as a formal part of the enforcement process and recognize the power of residents to identify sources of pollution and promote compliance.  This is a conversation that will continue to occur during the KEEN meetings in the coming months.

Special thanks to US EPA for showing such committed interest to the networks and for allowing Ryan and Cesar to promote their use in our communities.  These networks are changing the way we look at data, reporting, compliance and enforcement.  They are bringing back the control to communities for cleaning up their own neighborhoods.  For environmental justice communities, resident involvement is at the heart of improvements.