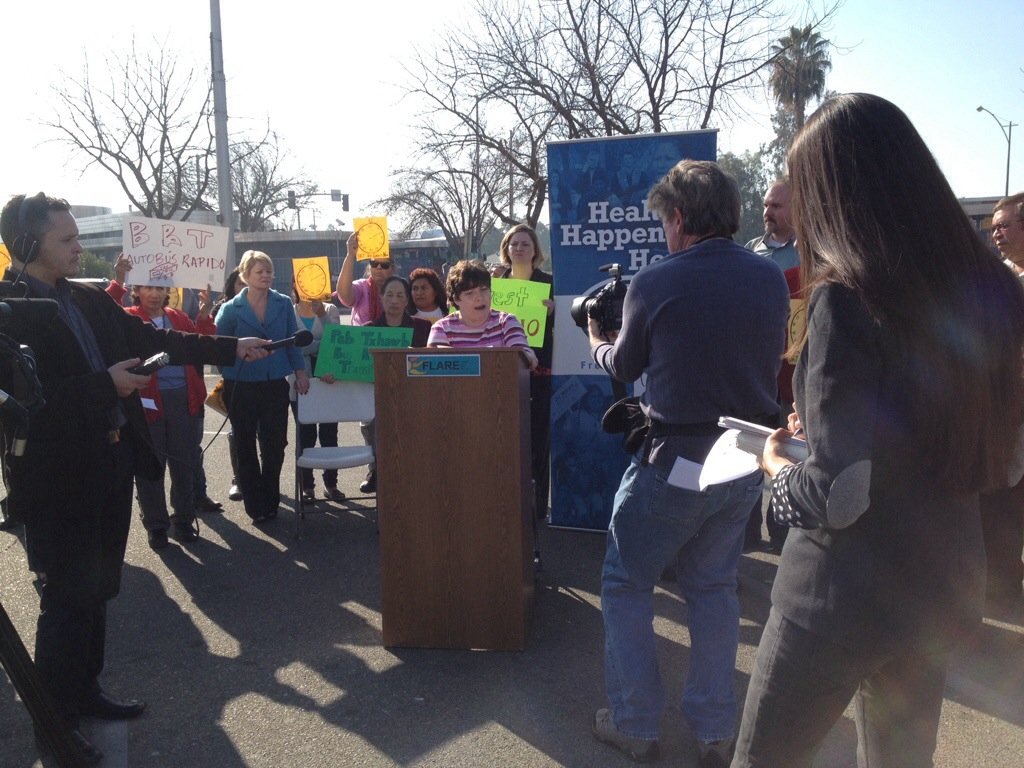 Community leaders representing Building Healthy Communities, The Know, FIRM, Coalition for Clean Air, Fresno Metro Ministry and CCEJN among others, gathered on Thursday at high noon to advocate for the development of a Bus Rapid Transit system in Fresno. The currently proposed bus system would connect two corridors, along Ventura/Kings Canyon and Blackstone avenues, with the Central District in downtown Fresno. Advocates shouted BRT! BRT! as many considered how faster bus service would benefit their life. Yolanda Espino, resident of South East Fresno advocated that walking a little further to the bus stop is a manageable trade for a faster connection to businesses and work.

Bus Rapid Transit is a key component of the Fresno General Plan Update and the Council of Governments Sustainable Community Strategy Scenario developed as part of SB 375. Recently, however, Bus Rapid Transit has become a controversial subject at City Hall with opponents wondering if this system will work in Fresno. Bus Rapid Transit would be funded by approximately $50 million in federal and state grants that the city has already received for this project. The current proposal estimates that operating and maintenance costs would be covered for the first three years through federal funding, and that Bus Rapid Transit fares would remain equal to Fresno Area Express fares

Council member Baines of the 3rd District spoke in support of BRT among the activists and media. Baines is one out of seven council members that will ultimately cast the vote to approve or reject Bus Rapid Transit for Fresno. CCEJN is an advocate of Bus Rapid Transit as it is a project that could be a pivotal point for the conversation on transportation access. We believe that this project will be successful and can serve as an example to future funding of multi-passenger systems, as well as stronger bike and pedestrian infrastructures. CCEJN will continue to work with advocates to make Bus Rapid Transit a reality!