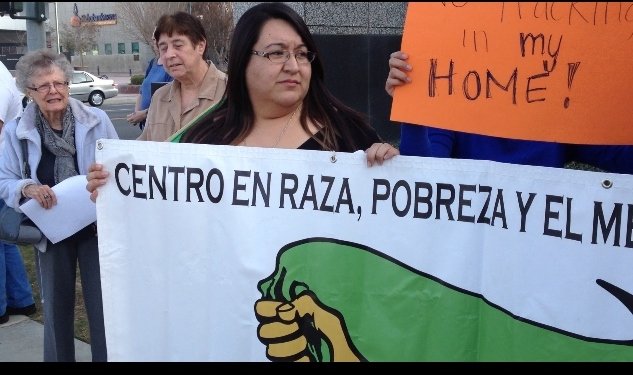 Dozens of community residents joined the fight against fracking last night in Bakersfield.  This mobilization occurred as a response to a hearing scheduled by the Division of Oil, Gas, and Geothermal Resources (DOGGR) to receive public comments on the proposed well stimulation treatment regulations as mandated by Senate Bill 4.  Groups like the Center on Race, Poverty, and the Environment (CRPE), Association of Irritated Residents (AIR), Fresnans Against Fracking, and CCEJN were present to demand a ban on fracking.

The hearing was attended by 80+ residents from all over the San Joaquin Valley.  Many industry supporters congratulated DOGGR for embarking in the process of these regulations.  However, far more residents spoke about the need for further scientific data, the need to invest in renewable sources of energy, and pressed the demand to ban fracking.  As Gustavo Aguirre, Organizer with CRPE, put it “it is intriguing that the industry in congratulating the Division on placing regulations on the industry.  There must be something going on, when the industry wants to congratulate a regulatory agency after placing what they claim are “the toughest regulations in the country.””  Other residents chose to make simple cases against fracking, like Donna Green of Fresnans Against Fracking that mentioned that all living things need two things to continue living: air and water. Without those things everything will die, and there is extensive evidence that proves that fracking is a threat to both of those elements.

Cesar Campos, Coordinator for Central California Environmental Justice Network delivered the following comments and asked the division to place a ban on fracking:

Central California Environmental Justice Network is fundamentally opposed to fracking & other well stimulation treatments that may arise from as an attempt to extract crude from the Monterey Shale.  We are opposed to this practice because of the enxtensive research that shows threats to our water & air quality & ultimately the health of San Joaquin Valley residents.  These regulations fail to provide a framework for safe fracking, because no such framework exists.  There is no safe way to frack & these regulations serve as a rubber-stamp bureaucracy process that only serves for-profit industries at the expense of the public well-being.  Nonetheless I’d like to mention concerns that we share in regards to the regulations.

First grave concern is that nothing in the regulations mentions air quality.  Regulations have been proposed to monitor & test water quality but DOC has not put forth any rule to monitor or test air quality.  This of course shows a blatant disconnect to the situation in the San Joaquin Valley by ignoring the widespread flaring that occurs all over Kern County fracking sites and harms our already sickening air quality.

Furthermore, the regulations limit direct notification & the opportunity to request groundwater testing to tenants and landowners at a 1500 feet radius–the problem with this is that water and air are not capped at a 1500 ft. radius.  The local Air District often claims that part of the air pollution in the San Joaquin Valley comes from China, and now DOC is telling me that I should not care about this practice if I live 1501 ft. from a wellhead.

I would also like DOC to get rid of the “exploratory wells” loophole that exists in these regulations.

Furthermore, I’d like to talk about the economic danger of continued reliance on oil.  The Economist publishes that if burned, the currently existing oil reserves of crude represent a 6 degree Farenheit increase to the global temperature.  In 2010 in Cancun, global leaders & politicians agreed that 2 degree Farenheit increases is all that we can afford to add to the global temperature before the effects are catastrophic.  This of course, even though, many scientists agree that an increase of .6 degrees is the real threshold.  Nonetheless the 2 degree goal represent that 2/3 of current oil reserves will not yield any return on their investment.  This type of economic bubble, much like the housing marked bubble that we experienced in 2008, has the potential for crashing global markets.

The deadline for submitting written public comments to the proposed regulations is Thursday, January 16th at 5:00pm.  Central California Environmental  Justice Network, would like to invite residents to submit comments and ultimately ask the Division to place a permanent ban on fracking and well stimulation treatments.  Submit written comments via e-mail to:  doggrregulations@conservation.ca.gov

The text of the proposed regulations can be found here. 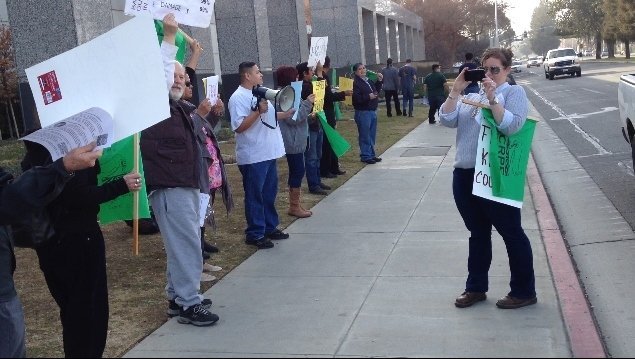