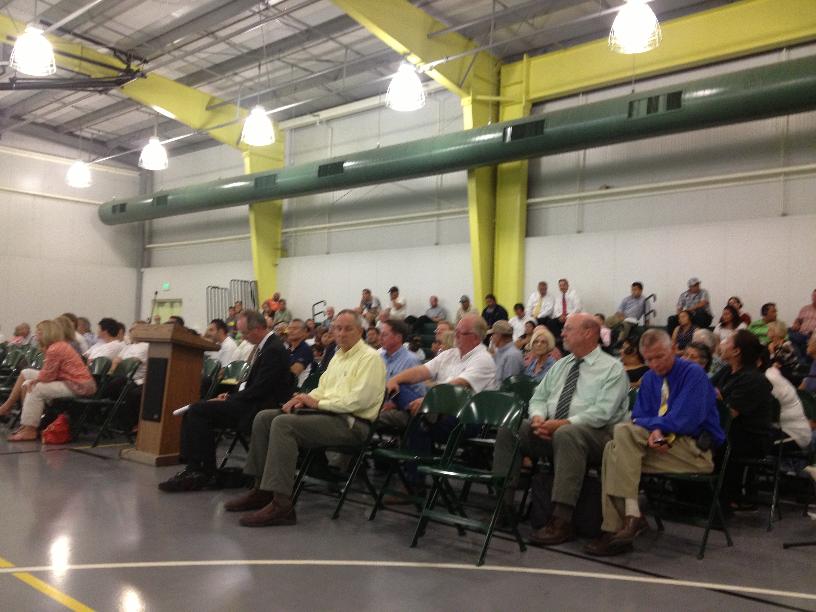 On Tuesday, September 17, 2013 the California Energy Commission (CEC) hosted the first out of three days of workshops and public hearings in regards to the Hydrogen Energy California (HECA) plant proposed for an area outside of Tupman and Buttonwillow.  The HECA project is a test project pushed by the CEC and the Department of Energy (DOE) as a way to promote “cleaner” carbon technology that arguably will produce “low carbon electricity and manufacture fertilizer.”

Staff from the CEC, DOE, and SCS Energy–an independent power producer that is hoping to move the project forward, talked to residents throughout the day about their current proposal.  Among the items discussed on Tuesday were sequestration and public health impacts.  HECA claims that sequestration technology is top of the line and will safely store CO2 underground.  However, as Tom Frantz of the Association of Irritated Residents, one of the interveners at the workshop pointed out, the sequestration efforts will be minimal in mitigating for metric tons of criteria pollutants and will do little to prevent leaks of carbon dioxide that arises from any incident.

This type of emissions will likely be felt by the residents of nearby communities considering that Kern County already faces the worst air quality in the nation.  In fact, the health impact study provided at the workshop admittedly does not take in consideration many of the gases that are already in high abundance in Kern County like CO2, PM 2.5 and others.  Because the “health impact study” fails to take that into consideration, the study is in no way a cumulative health impact assessment and makes no clear point as to how this plant will aggravate the health of Kern County residents.  However, since HECA admittedly  will be adding over 800 truck trips in and out of Kern County, one can logically assess that air quality will not improve.

CCEJN members joined the workshop, in which the CCEJN Coordinator shared a view that it is borderline offensive that when HECA and allies are talking about mitigation standards they are not talking in terms of public health.  It seems obvious that the primary way to mitigate bad air quality is by providing better options for health care access, and outlets for indoor physical activity for children and adults.  However, those type of mitigation strategies have been absent from the conversation, and those type of services are absent from the community.

After the workshop, residents from all over Kern County gathered to voice their opinions about HECA.  It is safe to say that most speakers were overwhelmingly opposed to the location, proposal, technology, and/or taxpayer subsides of the project.  Most residents spoke about the negative health affects that plague them because of the already poor air quality, others related how they are tired of feeling like guinea pigs for environmental projects that often bring about more harm.

A few speakers did speak in favor of the plant from a job creation standpoint.  However, we feel that this point is not a strong one since according to HECA publications, only 200 permanent jobs will be created.  This project also has a life span of 20-25 years.  It is outrageous to bring about this much pollution and so little benefits to the Kern County community.  This becomes even more troublesome if you factor in, the jobs lost due to the loss of agricultural farmland.

Essentially, CCEJN would like to see proposals from the CEC and DOE that detail clean renewable energy and how many jobs that would create.  It is ridiculous that in the year 2013 government agencies are still using taxpayer money to fund projects that have coal at their forefront.  Regardless of what you do to coal, coal has and always will be a dirty alternative to our energy needs–humanity has known that for a long time now.  The overwhelming majority of community residents know that, and displayed that in their remarks yesterday in Buttonwillow.  We encourage all of you to stand behind this movement and ask government agencies to begin funding truly sustainable, truly clean, and truly efficient energy projects.

The workshops and hearings continue today, September 18th, and tomorrow, September 19th in Buttonwillow.  The exact address is:

Anyone interested should attend the workshops–more updates to come!