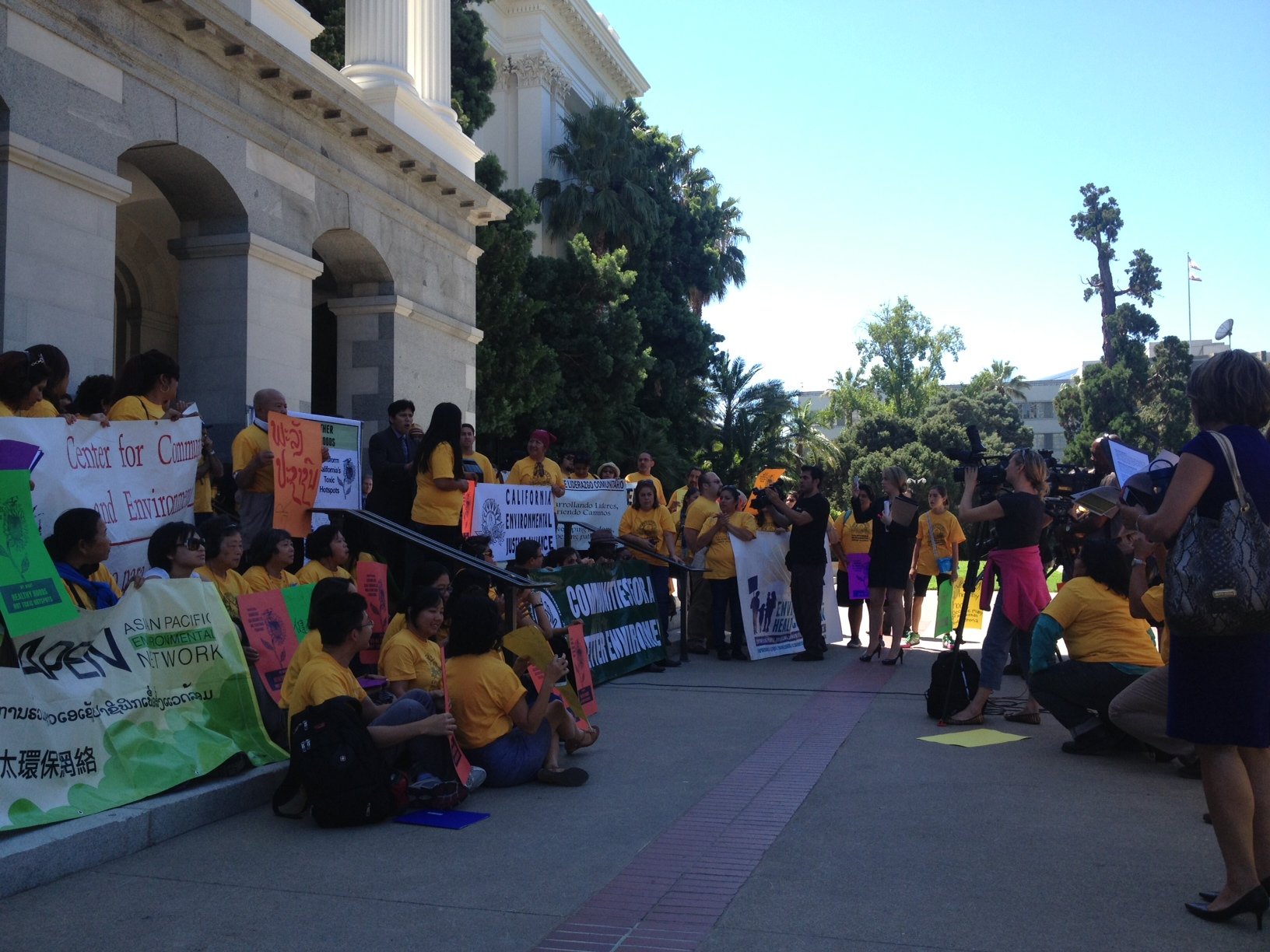 Yellow shirts were proudly worn at the Capitol West steps on Wednesday, August 28, 2013.  This rally served as the culmination of a two day long conference in Sacramento hosted by California Environmental Justice Alliance and many other partner groups.  This rally featured legislative speakers as well as community leader speakers and established the presence of an environmental justice movement that is resonating across the whole state.  From communities like San Diego, Richmond, Los Angeles, San Francisco, Coachella, Riverside, Fresno, Wilmington, Kettleman, Oakland, Bakersfield, Delano, and many others, the participants stood together to demand environmental justice from the California legislature.

Interestingly enough the Green Zones Congreso began one day earlier at the Library Galleria in downtown Sacramento.  Close to 200 participants traveled from across the state to gather in Sacramento and share their own environmental justice struggle and strategy.  During the morning session the group was broken up into three smaller groups in order to attend presentations in three key subject areas: Energy Conservation & Clean Energy Opportunities, Creating Green Zones, and Land Use.

The Energy Workshop explored the idea of ridding California of traditional pollutant energy sources like oil refineries, fracking, coal power plants, etc, and bring in more clean energy sources like wind and solar.  A focus on conservation also seemed to resonate highly with this group as many advocated for cycling, public transportation, green architecture and design, etc.  The workshop also focused on 4 principles as steps toward achieving green energy efficiency: 1) Solar for all—alternatives to get solar sharing programs for low income communities, 2) Fracking moratorium—calling for an end to this hazardous practice, 3) Shared Renewables—making renewable sources of energy more affordable for communities, and 4) Resources for Renewables – more industry and government investment on making renewable energy a priority and the norm in California.

The Green Zones Workshop focused on turning largely polluted areas into healthy thriving green zones.  Using tools like CalEnviroScreen and community ground trothing, residents are able to identify areas of concentrated pollution.  The task then moves to turning these areas from overburdened to thriving.  Through community beautification, conservation campaigns, and lobbying statewide policies it is possible to turn these communities.  The final workshop on Land Use helped the attendants explore the idea that improper land use policies can disproportionately affect low-income communities.  The participants learned organizing strategies that can aid in city shaping solutions. Just and comprehensive land use is also indispensable to creating thriving green zones.

The feelings of empowerment after the workshops were met by an address from Assembly member Rob Bonta of the 18th district.  Mr. Bonta showed a positive attitude towards the environmental justice movement, and used his speech to remind the group that there is still a lot of work to be done.  In the coming years more organizing will be necessary to advance those low income communities that the environmental justice movement is trying to serve.  As the opportunities arise, much work is necessary to capitalize on those opportunities.

Other legislative speakers that joined the activists at the Galleria on Wednesday morning were Assembly majority leader Toni Atkins of San Diego and Assembly member Anthony Rendon, who serves as chair for the Water, Parks, & Wildlife Committee.  Assemblywoman Atkins chose to make references to the 50th Anniversary of the Civil Rights March in Washington and tying them to the march for environmental justice in Sacramento on the same day.  Atkins, related the story of her father, a coal miner, who sadly passed away at a young age to remind the group about the importance of protecting vulnerable communities.  She left by advocating for the value of science to promote this issue, and the focus on building affordable homes that will create a more environmentally just California.  The Assemblywoman struck on this point because she knows that “even if the place is killing you, you still love the place you call home.”  And in these spaces everyone deserves affordable housing, health, economic prosperity, transportation, and a place that doesn’t kill you!

Assembly member Rendon explained the situation of his district, the 63rd Assembly District, which includes some of the most densely populated areas in the county.  In his district, constituents are often faced with contaminated and undrinkable water that they have to live with.  He suggested that the ej movement should create civic engagement and civic responsibility among all communities.  Rendon, argued that “combined communities of color” will either by the boom or doom of the environmental justice movement.  Engaging all of these communities in civics is essential to creating a movement that will ultimately be successful.  Importantly enough the Green Zones Congreso gave a glimpse of what this extremely important point looks like.

After listening to both of these legislators, the Congreso took to the halls of the Capitol building, complete with a yellow shirt, to make over 100 legislative visits that advocated an array of priority bills that the groups spoke highly of.  Resonating with the point of combined communities of color, the groups had among them monolingual Spanish, Cantonese, and Mandarin speakers, Latino, Asian, and African-American representatives.  Among the bills that the groups lobbied for were SB 605 by Senator Lara, AB 1330 by Assembly member John Perez and SB 43 by Senator Wolk.

SB 605 introduced by Senator Lara, or the Global Warming Solutions Bill seeks to do two primary things. First, the bill establishes some regulations that industry has to abide by in order to buy offsets in their cap and trade credits. Traditionally industry has been able to buy credits from any industry, including international industry, as they seem fit. This bill limits that ability to purchase credits within the U.S. border and Quebec (the bill is expected to be amended to reflect this). Because greenhouse gases are not emitted alone, but rather in conjunction with other smog causing pollutants, a bill like this will be beneficial to advancing the air quality of many communities in the state—as it advances the battle against short lived pollutants.

SB 605 also secures 125 million dollars to be invested in environmental justice communities. Governor Brown, in a controversial move, reserved the first 500 million dollars earned by the Greenhouse Emissions Fund to be transferred to the general fund in the 2013-2014 fiscal year. This bill reserves any funds earned after that initial 500 million, up to 125 million, to be invested in ej communities. This of course in case the GEF generates all of that money.

AB 1330 by Assembly member John Perez also does two primary things. First, the bill directs the EPA to establish a public database that holds information on cases of violations that facilities have committed. This is an especially crucial advantage to gaining and dispersing information to community members about the facilities polluting their area and harming their health. Secondly, the bill protects public comment time for people who are not commenting in English. Often times, side by side translation consumes about half of the public time allotted. This bill gives community members the same amount of time that any English speaking resident gets, aside from interpretation.

SB 43 by Senator Lois Wolk establishes a pilot program to access affordable renewable energy from a 600 megawatt reserve.  1/6 of this reserve, or 100 megawatts, would be set aside to install renewable energy in low-income communities.  The programs will allow consumers to purchase up to 100% of their energy consumption from renewable energy sources.  Something that the advocates touched on, were the creation of new green jobs for California, and the fact that this pilot program, if successful can spark more advanced green energy programs in the future.

At the culmination rally, the group chanted and celebrated but also attentively listened to the stories of community leader struggles like those of Eva De Luna, a member of Environmental Health Coalition who is a resident of City Heights in San Diego and commutes 4 hours to and from work every day and often has very little time to attend community meetings about environmental justice.  None the less Eva, always attends and advocates for a healthier environment because as she says “*our children deserve respect.*”  Respect is something that most environmental justice communities demand, although those demands are not always answered.  Maricela Mares Alatorre of El Pueblo Para El Agua y Aire de Kettleman City, relates her constant struggle against a polluting plant in her backyard.  A plant that was recently given a draft expansion permit by the Department of Toxic Substances Control.  Maricela, brings the message that “We are all Kettleman City!” and if her community is not safe, none of our communities are safe!

A few legislators addressed the crowd at the rally expressing their support for this cause and asking the participants to continue to organize, support, and demand from the legislature.  Among those that addressed the crowd were Assembly member Kevin De Leon who thanked the crowd for traveling from all over the state.  Assembly member Lorena Gonzales of the 80th District, who is outraged that in some communities “the healthier choice [for children] is to stay inside & watch TV rather than go outside to play because the air quality is so bad.”  She mentioned her regret for this situation and her hopes to reversing that.  Speaker of the Assembly John Perez, talked about his work in communities were tap water comes in colors, and his assessment that “we have some laws in the books with no teeth, so we’ve got to put some teeth on the law and some real standards for true environmental justice.”  A well-constructed statement about the lack of efficiency of many of our laws to protect those most vulnerable communities.

CCEJN members were part of this Congreso and want to thank CEJA for brining all of these leaders together and their continuous work for environmental justice.  CCEJN hopes to partner closely with CEJA and others in the future to bring better health outcomes to communities across California. 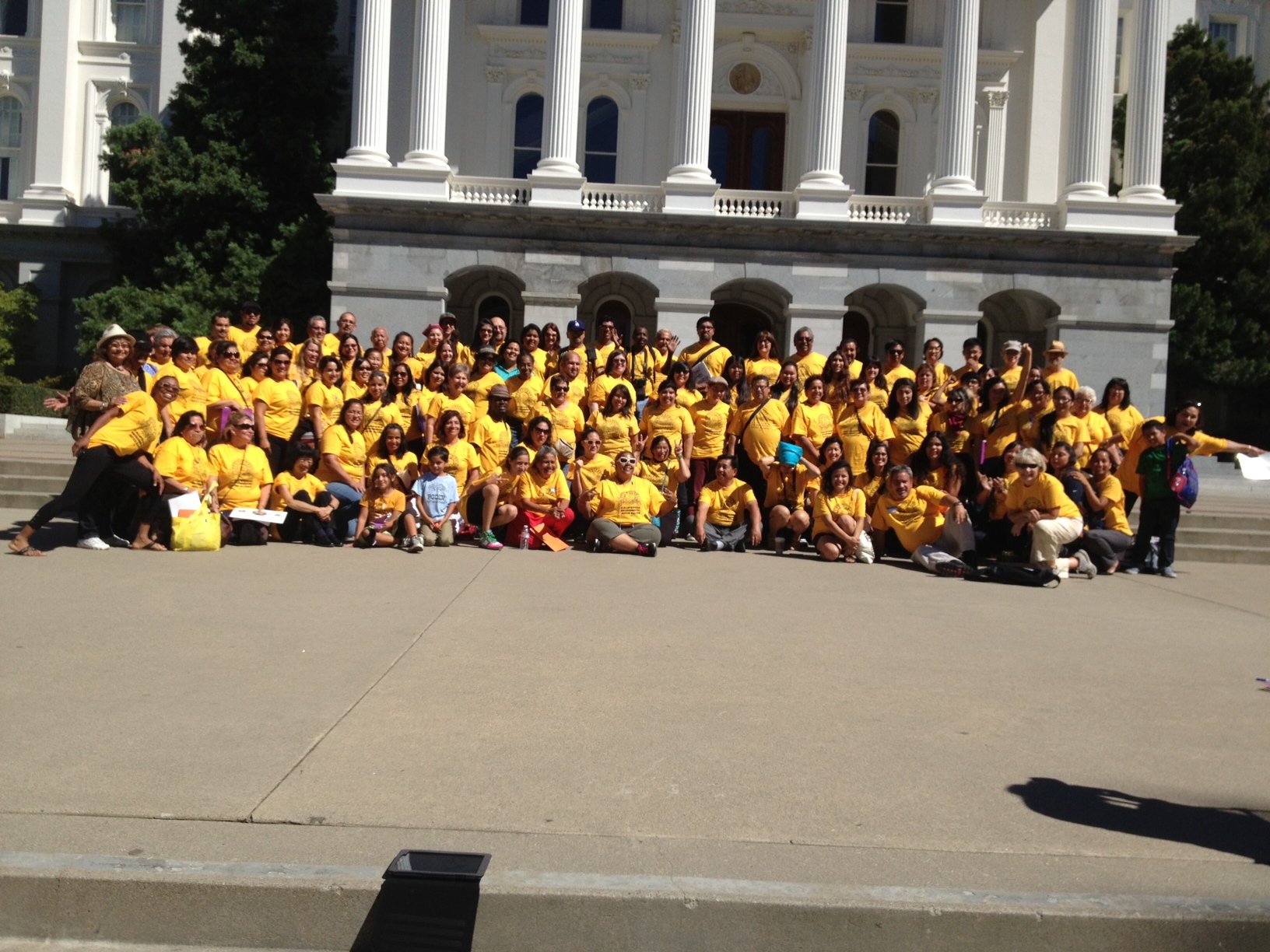