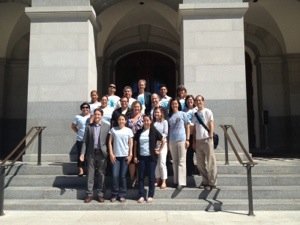 Central Valley Air Quality Coalition celebrated their tenth annual lobby day by traveling to the state Capitol building on Monday. CVAQ’s annual lobby day focuses on bringing attention, empowering residents, and lobbying for better air quality in the San Joaquin Valley. This year the coalition focused on mobilizing residents and community leaders from across the valley and allies from all over the state.

Together, the members of various organizations arrived at the Capitol early on Monday morning looking to embark in a long day session of legislative visits. During the visits these members explained to members of the legislature about many of the air quality concerns that are very present in the San Joaquin Valley and continue to harm our communities. Pushing for a legislative packet that CVAQ deems would make considerable improvements to the valley air quality, those members began meeting with representatives and staffers.

Among the bills that CVAQ was advocating for are SB 605 by Senator Lara, AB 1330 by Assemblyman John Perez, AB 304 by Assemblyman Das Williams. These bills serve to promote better air quality, government accountability, and investing in environmental justice communities.

SB 605 introduced by Senator Lara, or the Global Warming Solutions Bill seeks to do two primary things. First, the bill establishes some regulations that industry has to abide by in order to buy offsets in their cap and trade credits. Traditionally industry has been able to buy credits from any industry, including international industry, as they seem fit. This bill limits that ability to industry within the U.S. border and Quebec (the bill is expected to be amended to reflect this). Because greenhouse gases are not emitted alone, but rather in conjunction with other smog causing pollutants, a bill like this will be beneficial to advancing our air quality.

The bill also secures 125 million dollars to be invested in environmental justice communities. Governor Brown, in a controversial move, reserved the first 500 million dollars earned by the Greenhouse Emissions Fund to be transferred to the general fund in the 2013-2014 fiscal year. This bill reserves any funds earned after that initial 500 million, up to 125 million, to be invested in ej communities. This of course in case the GEF generates all of that money.

AB 1330 by Assemblyman John Perez also does two primary things. First, the bill directs the EPA to establish a public database that holds information on cases of violations that facilities have committed. This is a specially crucial advantage to gaining and dispersing information to community members about the facilities polluting their area and harming their health. Secondly, the bill protects public comment time for people who are not commenting in English. Often times, side by side translation consumes about half of the public time allotted. This bill gives community members the same amount of time that any English speaking resident gets, aside from interpretation.

AB 304 by Das Williams is perhaps a simple but necessary bill. This bill establishes that once a pesticide is deemed as a toxic air contaminant by the Department of Pesticide Regulation, DPR has two years to implement mitigation and stricter application requirements. It is important to note that the process for identifying pesticides as toxic air contaminants has already been established by a piece of legislature passed in 1983. This bills comes as a response to DPR’s inadequacy to comply with that bill. In 30 years DPR has implemented stronger regulations to arguably 1-2 pesticides. This bill simply gives DPR a timeline to do what it was already supposed to do.

CCEJN was honored to join CVAQ members at the Capitol on Monday and advocated alongside the activists for cleaner air in the Valley. We encourage all of you to call your representatives and advocate for these very important bills.