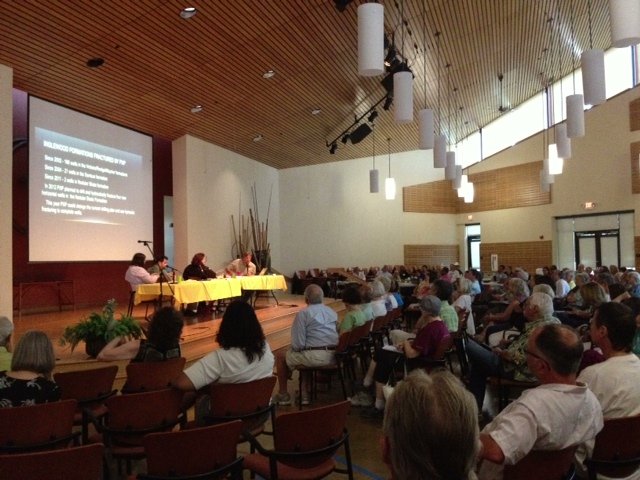 As part of the kickoff event for Fresnans Against Fracking, last Saturday, July 15,2013 speakers, activists, and community members gathered at the Unitarian Universalist Church of Fresno to foster a comprehensive discussion around the issue of fracking.  Fracking or hydraulic fracturing is the process of injecting high pressure water and chemicals into deep wells (sometimes up to 2 miles long) in order to break through shale rock and extract crude and natural gas.  Fracking has recently seen increased media attention in California because the Monterey Shale, which extends from Monterey down to Kern County, has been deemed by some politicians and oil companies as the way for California to reach energy independence.  The event was attended by over 130 people who were interested in learning about the effects that fracking is currently causing and the threats that increased fracking wells represent for all of California.  The event showcased two panels that served to guide the discussion from two angels: information & activism.

The first panel showcased Adam Scow from Food & Water Watch who spoke about the harms that fracking causes to our water networks.  Adam informed the public that in order to frack a single well, companies can use anywhere between 1/2 to 4 million gallons of water.  In the valley, this means conflicted interests with the agricultural industry.  Especially since fracking distills so many chemicals into the water that almost all water that is contaminated through fracking will turn into waste water, as it is not easily or often decontaminated.   In many cases, it is simply disposed off into unlined dirt sumps that further the contamination as that water may trespass into underground water reservoirs.  Not only that, but in recent years researchers have found a correlation between this waste water and earthquakes–the Prague earthquake in Oklahoma is a prime example–an earthquake of a 5.7 magnitude that occurred on November 6, 2011.  This phenomenon is observed because “the fluids are driving the faults to their tipping point” says Nicolas van der Elst, a researcher at Columbia University.  Once the areas ares under critical stress from contaminated waste water, they are subject to tremors triggered from distant earthquakes–in some cases earthquakes that happen as far away as other continents.

Following in the first panel, Andrew Grinberg from Clean Water Action, spoke about the federal, state and local regulations on fracking.  Andrew addressed some of the existing problems from the fracking regulatory structure that is dysfunctional because it represents a narrow definition of fracking, no permit requirements, no regulations for fracking in regards to air quality, protects at least 2% of chemicals from public disclosure claimed as trade secrets, and provides no requirements for notification to nearby landowners.  Andrew also explained how in Congress the Helliburton Loophole exempts fracking from the Safe Drinking Water Act and the Clean Air Act.  However, not everything is bad news in terms of policy, California was able to introduce 3 moratorium bills on fracking this year alone even against many skeptics who said the oil industry was too powerful to allow this type of bills to progress.  Another bill that is worth paying attention to is Senator Pavley’s SB 4, which was introduced to bring transparency and accountability to the oil industry.  The bill requires oil companies to publish a comprehensive list of chemicals, their concentrations, amount of water used, and information on the mixture’s disposal, impose random governmental inspections on fracking sites, and establishes a division formed to create rules and regulations specific to fracking that must be implemented by 2015.

Finally in the first panel, Cesar Campos, Coordinator of Central California Environmental Justice Network spoke about the hazards that fracking represents for air quality.  Cesar used imagery to convey the message that fracking further degrades our air quality by releasing chemicals that essentially prevent the body from acquiring oxygen–a phenomenon that is especially threatening to vulnerable populations like children, the elderly and those who suffer from asthma.  In the Central Valley, an increase in fracking of the Monterey Shale means an added influx of trucks bringing in machinery to frack wells; to frack one well a company can sometimes use up to three 400,000 horsepower propane or diesel engines for up to 40 days.  This stationary practice results in heightened stationary releases of Nitrogen Oxides (NoX) and Volatile Organic Compounds (VOC’s).  After fracking the well, and during the extraction process, companies are retrieving both crude and natural gas, however the low price for natural gas often makes it unprofitable for companies to transport and thus it is burned at the site in a process called flaring.  Flaring of natural gas results in the highest threat to air quality associated with fracking because it releases massive amounts of NoX–which forms smog, Carbon Monoxide (CO)–which acts as an asphyxiate, and Carbon dioxide–which is the most recognized and abundant greenhouse gas.  Furthermore natural gas is rich in Benzene, a known potent carcinogen and Methane, which is the most abundant gas in natural gas and is extremely flammable.   Methane is also an asphyxiate and in large concentrations can cause dizzines, nausea, unconsciousness, and even death.  The National Oceanic Atmospheric Administration (NOAA) on a report in 2012, explains that hazards from leaking and burning methane utterly counter any climate benefit from switching to natural gas power from coal.  In the valley we have already seen cases where natural gas flaring has been detrimental to our air quality.  In Shafter, Kern County, Vintage Petroleum flared natural gas for about 2 straight months last year, making the NoX and VOC levels in Shafter higher than in nearby urban Bakersfield.

The second panel consisted of activists from around the state including: Shannon Biggs from Global Exchange, Adam Scow with Food & Water Watch, Roy McKee with Whittier Hills Oil Watch, Paul Ferrazi from Citizens Coalition for a Safe Community, and Jean Hays with Women’s International League for Peace & Freedom.  The activists gave testimonials to the work that groups all around California have embarked in to stop fracking in our state.  Some suggestions were made to Fresnans Against Fracking about using political campaigns, and voter information strategies to elect officials who are conscious about fracking hazards or to persuade already elected officials to support the work against fracking.  Overall, a theme of informing the public seemed to resonate among the whole group.  Without the support of those who are not the typical audiences, the anti-fracking movement will not reach its full potential.  Igniting the interest among usually uninterested or unaffiliated groups is necessary to spark a strong movement.  Adam Scow announced the work to form other groups like farmers against fracking, and students against fracking.

Central California Environmental Justice Network stands with Fresnans Against Fracking, Californians Against Fracking and other movements aimed at discontinuing this practice, because we understand that there is no safe way to frack California.  The Central Valley cannot afford added pollution from oil companies considering the already alarming situation of our air and water.  CCEJN understands that fracking will not make the state energy independent, as opposed to what the oil propaganda claims, and even if that was the case, we are not willing to sell our residents in order to reach that status.  Fracking is dangerious, the continuous reliance on fossil fuels is dangerous, and better alternatives like solar, wind, and hydroelectric power must be explored to clean our air, water and land.  Stay tuned for links to petitions that ask the Governor’s office to place a ban on fracking in California.

Senator Pavley’s Bill, SB 4, has taken many amendments since the first publication of this article.  The current bill actually creates more problems than it fixes.  It implements a doctor gag rule-which prohibits doctors from talking publicly about the harmful health effects of fracking, no longer requires companies to disclose concentrations of chemicals, and under some interpretations free fracking operations from compliance with the California Environmental Quality Act (CEQA).  Please contact Senator Pavley asking her to drop SB 4 and call your representative to ask them to vote NO on SB 4, should the bill continue its process.  This bill has turned to represent more threats to the environment than current law.