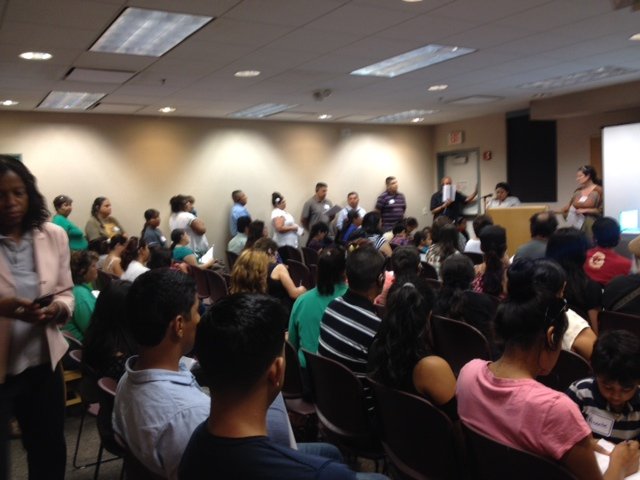 Lamont–The Department of Pesticide Regulation traveled to Lamont to hold a scoping workshop for their update to rules regarding pesticide use around schools. Unsurprisingly, this is an incredibly complex conversation and something that is very important for many residents in the San Joaquin Valley. The meeting was poorly planned and showed the Departments inability or lack of interest to provide a space for residents to voice their opinions. After the meetings, the Center on Race, Poverty, and the Environment (CRPE), Californians for Pesticide Reform (CPR) and CCEJN filed the following complaints with EPA office of EJ, the Secretary of Cal-EPA, and the Director of the Department of Pesticide Regulation:

1. One single date in the whole San Joaquin Valley?
2. One single location in the whole San Joaquin Valley? Many folks had to leave early to get home at a decent hour, especially those that made the almost six hour round trip to get here.
3. The meeting was held in a small space and we asked for a bigger location and Lamont superintendent offered a bigger space and DPR said, “no thank you.”
4. We were told ahead of time we’d have 3 minutes and at the beginning of the meeting we were told we have LESS than 2 minutes.
5. If time is really the factor, save time with translation. Why only simultaneous translation for Spanish speakers? Why not for english only speakers?
6. June? June? School is out of session for many. Teachers have already gone out of town on planned vacation. Families in Delano and other kern county communities have middle school and high school graduations tonight.
7. DPR has an interesting practice of separating workshops for growers, applicators, and community members. All of these groups are undeniably tied to agriculture and should be respected equally as such. I’m wondering at what point Cal-EPA begins to question this “Separate but equal” philosophy that obviously can be challenged in legal and/or historical contexts.

Even in poor circumstances, community members from across the valley showed up to voice their opinions on this subject. These residents demonstrate that even though the Department wishes they were not paying attention, they are! They also demonstrate their power to demand better conditions for their children and their communities.