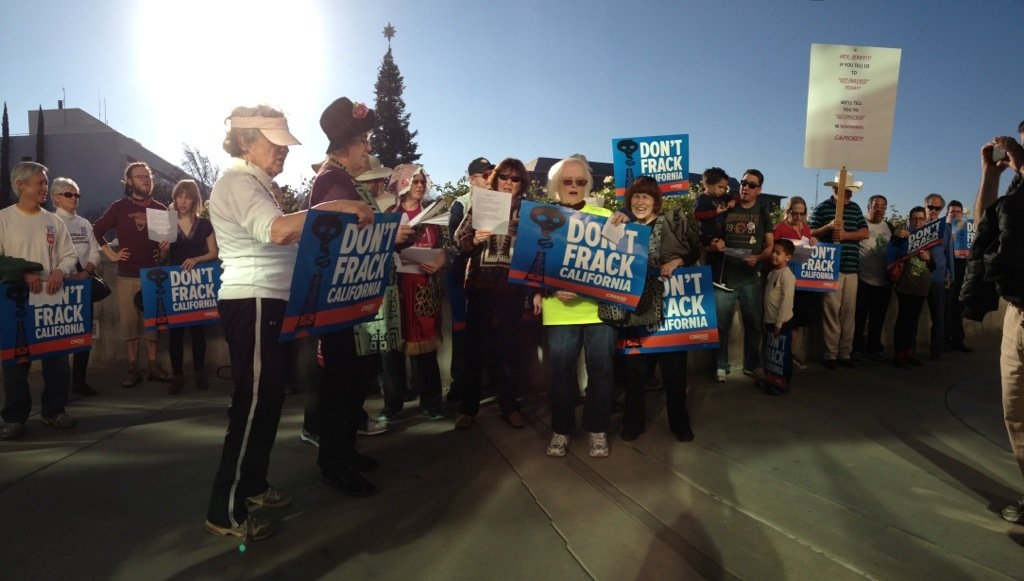 On Monday, January 13, local activists mobilize to welcome Governor Jerry Brown at Fresno City Hall. The group carried a strong message: Put a stop to fracking in Califronia! Chanting and raising their voice, the protesters gathered media attention and continued to push the message that the dirty oil in the Monterrey Shale will contribute to climate change. More specifically, fracking, the practice used to extract the oil will harm the water, soil, and air of the San Joaquin Valley. This is an unacceptable practice that must be stopped across the state of California.

Fresnans Against Fracking, a CCEJN partner agency, organized the mobilization that began in the second floor balcony of Fresno City Hall. The protesters chanted and shouted for the health of our water, air, and children. The mobilization gained momentum and filtered inside City Hall, where they were stopped by members of the administration, and were unsuccessful at entering the press conference room where Gov. Jerry Brown was allegedly speaking to local politicians about the drought that is currently threatening the Central Valley.

We are expecting the Governor to declare a State of Emergency in the region later this year because of the drought. This fact makes it even more troublesome that the administration is not moving towards a moratorium on fracking, as the practice consumes several thousand gallons of water per fracking well, and some sources like CREDO Action have speculated that in reality it takes anywhere from 2 – 5 million per well. Fracking, of course, also carries the potential to harm other water reservoirs through leaks, and the industry’s list of SB4 protected ‘trade secrets.’ Essentially a list of chemicals and concentrations that may or may not be released for public knowledge and discourages health professionals from attributing adverse health factors to fracking.

CCEJN as part of Californians Against Fracking will continue on this fight to stop fracking throughout the state. Continue to visit our site for more updates.