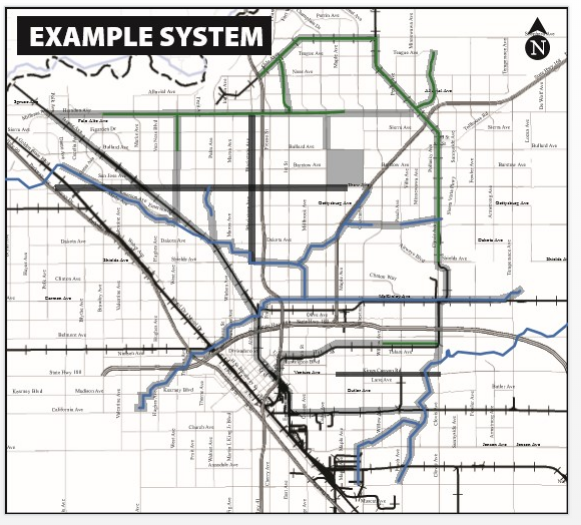 According to the last census, most of Fresno’s population – eighty-five percent according to the most recent United States census – consists of minorities, women, youth, the elderly, and low-income people.  But the 1% of the population that cycles regularly comes from the remaining fifteen percent of Fresnans! That one percent is largely male, white, able-bodied, middle-income and young or middle-aged. They have easy access to the present system that offers the finest riding experiences.

Why is this? In 2011, the League of American Bicyclists (LAB), one of the largest and oldest rating organizations in the United States, rated Fresno’s bicycling system as the fifth best in the nation.

To date, the City of Fresno has spent $36 million to implement its Bicycle, Pedestrian & Trails Master Plan (BPTMP). (5) To fully carry out the plan will require another $1.3 billion.  Will this investment be effective to increase ridership beyond the existing 1%? Even fully implemented, the master plan infrastructure will not be attractive to these communities because the plan neglects a critically important factor – people’s fear of bicycling alongside automobiles.

The BPTMP, along with bicycle advocates and people who use the system now, say that those who do not bicycle just need to be taught how safe and fun bicycling is. The master plan has an entire section devoted to education and encouragement. Taking this approach places the burden on those who fear sharing the roads with vehicles and not on driver behavior.

The master plan suggests that people need to get over their fear of bicycling on streets with cars – however, such statements fail to acknowledge that cars are moving fast and weigh thousands of pounds, and motorists are often contemptuous of bicycle riders. Instead of telling frightened people not to be afraid of what they have every reason to fear, the BPTMP should focus on creating facilities that remove the reason for that fear.

Most of the research carried out over the last decade on why people do not bicycle finds that lack of education is not the problem – traveling on roads with cars is the problem.

In 2011, for the Fresno General Plan and Development Code update, a survey of bicycle users in Fresno showed that “Most people [of Fresno] feel safer on Class I facilities” — that is, bicycle lanes completely separated from streets. (9) For the development of the Bicycle, Pedestrian & Trails Master Plan, another survey yielded the same result.

Yet the master plan states that the only really important obstacles to bicycling are things like freeway crossings or streets in county islands where bicycle lanes are not painted on the asphalt.

The Brookings Institute declared that the City of Fresno has the highest concentration of poverty in the United States.  Many who live here cannot afford cars; they are transit dependent even as bus service has been shrinking because of budget cuts.  With the country still in the worst recession in a century, transit systems, which are heavily subsidized, are at risk of losing additional funds.

A system of connected Class 1 bicycle facilities, like a well-designed freeway system, would allow low-income people to travel around Fresno on bicycle as easily as in the cars they cannot afford. SEE MAPS. 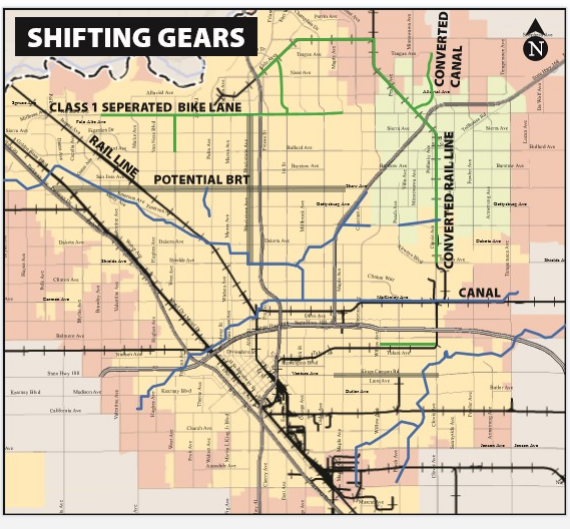 Actually, a well-connected Class 1 system would provide economic, environmental, and health benefits to the entire population of Fresno.

Commuters would no longer have to be stalled in traffic; they could wave to trapped motorists as they flashed by on their Class 1 way to work. Children could bicycle safely to school (imagine the savings in time and fuel that would bring about, not to mention the improvement in children’s health). All kinds of errands could be done by bicycle. People could reach appointments by bicycle. Families could bicycle together for recreation. A fully connected Class I network would attract bike enthusiasts from all over the country. The Sugar Pine Trail already attracts people from outside Fresno – imagine the money-spending tourists and competitive events that an entire system would attract.

Fresno could have a future in which 20% to 30% of the population use bicycles, rates commonly found in Europe. Before we spend $1.3 billion to build a bicycle system that will have few Class 1 facilities (poorly connected to one another at that), how can we redirect our efforts to make bicycle riders out of people from the ninety-nine percent who do not bicycle now? Here is a three-step program:

One – Fresno city and county must recognize that the public will take bicycling seriously only if they have Class I (fully separate) facilities. The Clovis Sugar Pine Trail is an ideal example; anything less will not address the concerns of ninety-nine percent of Fresno’s population.

Two – The BPTMP to focus on creating a system of interconnected Class I trails that link residential areas with meaningful destinations. To make it affordable, use the railroad lines and canals that crisscross the city. There are precedents for this. The Clovis Sugar Pine Trail was created from a former railroad line. The City of Fresno converted land along the Enterprise Canal into a bicycle trail.

Three – The people who do not bike must be made aware of the benefits of a Class I bicycling system. They need to become advocates of such a system – to articulate their fears of riding in traffic, and to demand the health, environmental and financial benefits that a usable, viable system would provide.

The City of Fresno has already stated in official reports that it sees the value of using canals for bicycle lanes. As for railroads, the California Air Resources Board has identified rail yards as a major source of health problems for people who live near them.  Because Fresno has a very large rail yard near low-income residential areas, the railroads may be willing to open their rights of way to bicyclists in exchange for air quality offset credits.

There aren’t many cities that have full bicycling networks. Fresno should make use of its incredible canal and railroad opportunities to have the best in the United States. It would benefit the entire population, especially low-income groups, provide health benefits, increase family income and attract needed dollars to Fresno’s economy.