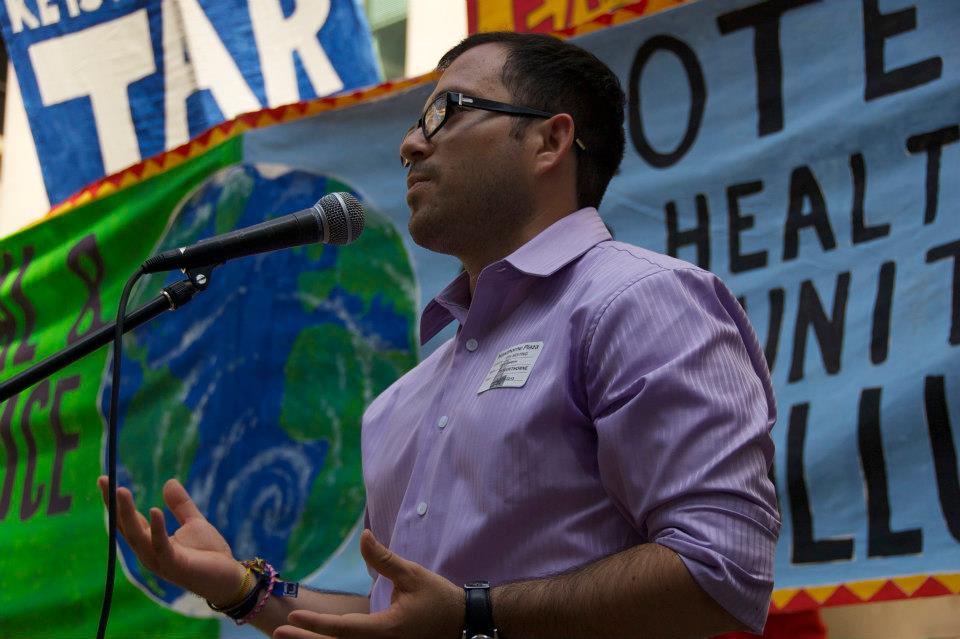 On April 22nd, CCEJN Coordinator Cesar Campos, attended the San Francisco Earth Day demonstration at the EPA office along with members of other organizations affiliated with CCEJN:

At the beginning of the day, a meeting was held between environmental justice organizations and U.S. EPA and Cal EPA officials. Members from over 15 different environmental justice organizations were present at the meeting including Greenaction, residents of Gonzales opposing the Plasma Arc Garbage Incinerator, El Pueblo Para El Agua y El Aire and others

The meeting was fast paced as we all wanted to voice our demands to EPA
officials. The most common concerns involved air quality transparency, water
pollutant examination, fracking permits, withholding permits from toxic dumps
and incinerators, and the Keystone XL pipeline.  I voiced the frustration that
many of us feel living in the Central Valley where the U.S. and Cal EPA seem to
forget that our populations are already over-burdened by environmental hazards.
I spoke of how these hazards prevent our children from reaching their full
health and social potential. I also tied in the KEEN and FERN projects by
asking EPA to fund more reporting projects that allow low-income and monolingual
populations to bring forth their concerns and raise their voice. I sited as an
example the findings from “Land of Risk, Land of Opportunity” that show the
discrepancy between what the state has marked as pollutant facilities and what
the residents actually know to be polluting their neighborhoods.

After the meeting we joined the rally with hundreds of demonstrators who were
delivering their message with folklore and excitement. Some of the EPA
officials were present as the demonstration used a series of speakers to connect
the energy of the public with the demands that we had made earlier. Maricela of
Kettleman City told compelling stories about residents with birth defects, and
the story of a mother (present at the rally) who’s daughter was diagnosed with a
lump on her breast at age 9! Residents from Gonzales spoke of the increase in
asthma rates and respiratory illnesses. About the incinerator, one of the
speakers asked “Why don’t they put it in Beverly Hills?” which seemed to
resonate strongly with the public. I followed the mission of CCEJN to bring a
voice to those who would otherwise suffer in silence by translating an account
of what it is like to be a farm worker in the valley “cooking in pesticide”
because of the poor regulations and enforcement of pesticide use. After the
rally at the steps of the EPA, the demonstrators marched over to the State
Department to narrow their focus and make public comments about the proposed
Keystone XL pipeline.

Overall, the support of the public brings hope and renewed energy to the 60+
organizations present at the demonstration. It is important to feed off the
passion of others and the small successes in preventing permits and expansion of
polluting industry. Throughout the day the message was clear, these
organization will not cease working for environmental justice. We are looking
at you EPA(s)!

This effort in San Francisco was extremely important as it let environmental justice organizations directly speak to Region IX directors about the projections of our communities and how much work the organizations are doing to mitigate the environmental hazards that continue to strike ground in impoverished areas.  The Office of Management and Budget just released a budget report* that strengthens the credibility of the EPA in the eyes of the nation.  In times like this, it is important to continue to nurture direct contact and feedback with Cal EPA and U.S. EPA that seeks to empower our communities.  CCEJN will continue to work on this.